Exploring the Universe with Composites

To further the latest objectives in Astronomy such as understanding the formation of solar systems, learning about the cosmic origins of life, and charting the evolution of galaxies (to name a few), the National Research Council (NRC) of Canada is developing a new carbon composite antenna for the National Radio Astronomy Observatory’s (NRAO) next generation Very Large Array (ngVLA).  The image below illustrates the design.

While the tower, the red linear drive quadrant and the frame directly attached to it are steel, the rest of the structure will be made from carbon-epoxy composites.  The size of the green primary reflector is 18 meters (59 feet) wide by 21 meters (69 feet) tall.  It is a thin (5.3mm) solid carbon layup that will be made in a single piece using vacuum infusion.  This primary reflector surface is supported only around its outer edge.  The conical Outer Back Structure (OBS) will also be vacuum infused from carbon-epoxy composites, but is to be made in smaller pieces which would be built off-site and shipped in.

In order to reach the sensitivity and spatial resolution requirements modern radio telescopes are built as arrays, and in this case the array would consist of 244x18m randomly spaced antenna and 16 x 6m antenna.  The radio frequency range for this new array is 1.2GHz to 116GHz, with the high frequency dictating a surface accuracy requirement of better than 180 µm RMS (or one part in 100,000!).

Carbon composites are the material of choice for the radio reflector surfaces and the secondary and feed support structure for two main reasons: highest available stiffness to weight ratio, and a low coefficient of thermal expansion (CTE).  At the same time the use of composites along with the vacuum infusion process enables the construction of a single piece (joint free) reflector surface, a desirable feature which increases the performance of the telescope.  Also, molded composites surfaces are desirable for arrays where a high degree of uniformity between reflectors means a greatly improved performance of the whole array when the many telescope ‘beams’ are digitally combined into a single ‘image’. 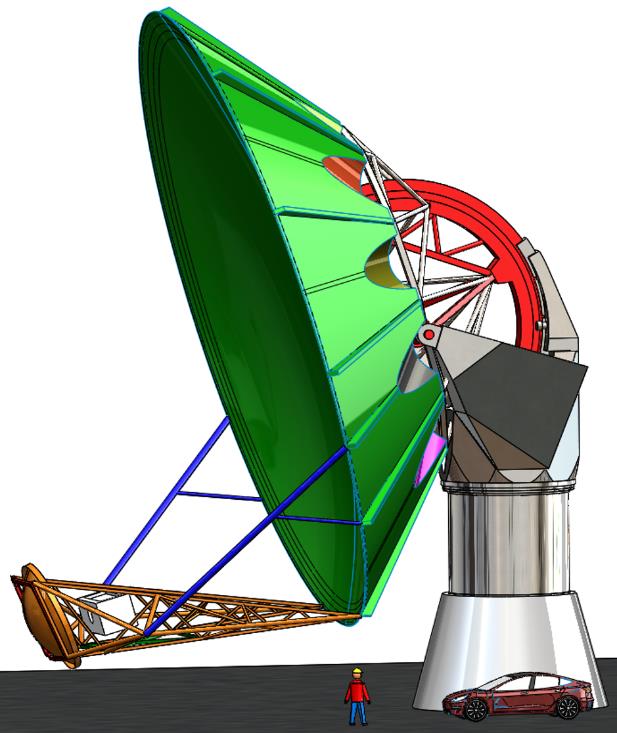