Since its inception, the team at A&P Technology has been known throughout the composites industry as problem solvers. Its ability to create solutions was first showcased in 1986 when General Electric Aircraft Engines (GEAE) needed a braided tape in excess of 22" wide for a jet engine containment belt, and standard braiding machines were not capable of producing that width. A&P decided to design and build the size of machine required for this application, a 400 carrier machine, and this braided tape design was used in the manufacture of over 2500 containment units. This was the beginning of A&P's venture into developing a line of Megabraiders™, the largest line of braiders in the world.

Soon after the development of the 400 carrier, A&P was asked to design a biaxial sleeving for a side impact airbag for automobiles. The design required very small yarns for reduced friction and called for very high coverage, parameters that could only be met by producing a braid on a very large machine. To meet these requirements, A&P built a 600 carrier braiding machine. The success of the airbag material design resulted in the production of over 48 million feet of airbag braid used by BMW, Land Rover, MINI Cooper and Cadillac Escalade.

From there, A&P continued to design and build Megabraiders™ in order to solve a variety of composite material requirements. A&P's line of Megabraiders™ is the largest in the world ranging from 172 – 800 carriers and allowing composite engineers a vast array of design options. 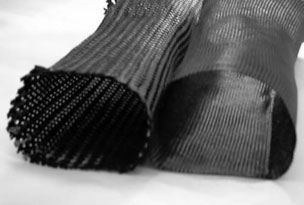 The range of Megabraider machinery gives composite designers many options. Here the same diameter sleevings are shown meeting two different design requirements. On the left is a carbon braid with 96 ends of 12k carbon made on a 96 carrier braider. The braid on the right was made on a 400 carrier braiding machine with 400 ends of 1k carbon. 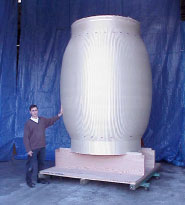 The largest structural braid ever produced – 10' long with a maximum diameter of 94" and a minimum diameter of 64" – was made on A&P's 800 carrier braiding machine. This single layer Vectran braid is used for a NASA Inflatable Airlock.