A NASA study shows that steel/composite hybrid gears save significant weight, and could mitigate vibration-related noise.

Among the US National Aeronautics and Space Admin.’s (NASA, Washington, DC, US) many missions is The Rotary Wing Project, established to increase helicopter speed, range and payload, while decreasing noise, vibration and engine emissions. Myriad projects are contributing to these overarching goals. Among them is one funded through a Small Business Innovation Research (SBIR) contract that is focused on designing better gears for helicopter drive systems. A team of composite materials specialists is pursuing that end. Headed by NASA Glenn (Cleveland, OH, US) research engineers Dr. Gary Roberts and Dr. Robert Handschuh, the team includes members from the US Army Research Laboratory (Adelphi, MD, US) and braided reinforcements supplier A&P Technology Inc. (Cincinnati, OH, US).
Why gears? A helicopter’s drive system (engine, vertical driveshaft and geared transmission) makes up 10-15% of the aircraft’s total empty weight and is a major contributor to helicopter noise due to vibration. Roberts explains that newer but all-metal multi-speed transmissions 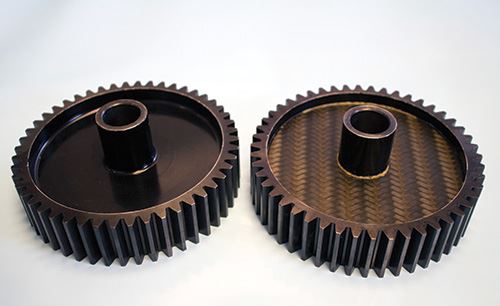 could be employed to improve helicopter speed and efficiency but would add significant weight and wouldn’t address the need for acoustic damping. He asserts, however, “There’s potentially a very high payoff in … reducing vibrations near the source, which is primarily at the gear mesh point.” Why, then, composites? “The reason we thought this was a good project,” explains Mike Braley, A&P Technology’s VP of application development, “was that if you replace some of the metal with composites, you could interrupt the vibration transmission pathway from the gear teeth to the center shaft, which will help reduce overall noise, and at the same time reduce the gear’s weight without sacrificing good load performance.”
Roberts and his team, therefore, decided to investigate how composites incorporated into transmission gears could reduce not only weight and vibration but also, ultimately, maintenance and repairs, because they would have lower densities and higher damping coefficients than conventional steel gear alloys. During the project’s first phase, the feasibility of three metal/composite attachment concepts was investigated, small spur gear prototypes were built (using one of the concepts) and then tested. The ongoing second phase involves investigation of larger, optimized gears and an all-composite web/hub/shaft concept, along with vibration testing.

So far, composite material and a steel/composite adhesive bond have proved capable of handling temperatures, loads and oil exposure within a gearbox. Static testing shows the mechanical interlock features provide sufficient strength for torsional loading. Hybrid spur gears have shown nearly 30% weight savings compared to all-steel gears, without design optimization. And A&P is investigating the use of composite material in the gear hub and connecting shaft to form an integrated web/hub/shaft in composites with steel gear teeth. Roberts anticipates that this design could yield 50% weight savings (Fig. 6, at left). The braided preform and resin infusion process are under development. “An initial design and prototype will be delivered at the end of the contract,” he predicts. “A&P is working out some very intricate fiber architecture that results from the shape of the preform, and how that architecture can handle the required loads.”
But Roberts contends, “We are just beginning to explore the possibilities.” The helicopter gearbox is a challenging environment. “As a result, flight qualification for rotorcraft will be very expensive and take a long time. But,” he adds significantly, “I believe there could be other commercial/industrial applications for gears of this type in the nearer term.”